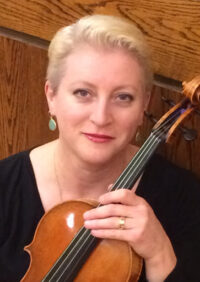 Australian-born Victoria Miskolczy has been Los Angeles Chamber Orchestra’s (LACO) Associate Principal violist since 1989 and joined the Cayuga Chamber Orchestra during the 2014-2015 season. Equally sought after as a chamber musician, soloist and orchestral musician, her many concert appearances include performances with the Oregon Bach, Ojai, Mostly Mozart music festivals; and the Sydney Symphony Orchestra and Australian World Orchestras and the Pacific Symphony, among others. Her many California chamber music credits include performances with the Capitol Ensemble, Salastina Chamber Music and Jacaranda series, Camerata Pacifica, Jacaranda Series, and LACO’s In Focus (formerly Westside Connections), A La Carte and Baroque Conversations.

While a resident of Los Angeles, Victoria has been adjunct professor of viola at the University of Southern California and California Institute of Technology. She also taught privately at her home, and some of her younger students have gone on to study at The Juilliard School, U.T. Austin’s School of Music, and Indiana University’s Jacobs School of Music.

Ms. Miskolczy has also performed solo recitals in Australia, two of which were aired live on national radio, Australian Broadcasting Commission FM, as well as many solo recitals in California. In addition to her orchestral, chamber and solo work, she is in demand as a studio musician and has played on hundreds of motion picture soundtrack scores over the past 31 years for composers such as John Williams, James Horner and Jerry Goldsmith, Henry Jackman and Christophe Beck, and on recordings with such popular artists as Barbra Streisand, Lady Gaga, and Queen Latifah.