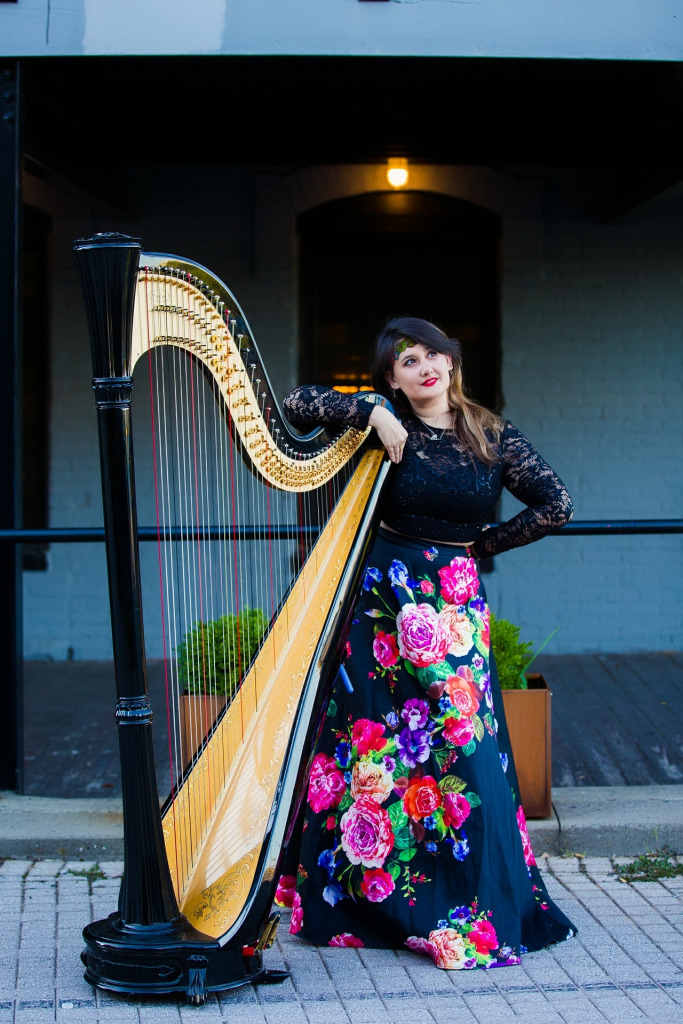 Often described as a quirky and engaging performer, who is fully at home on stage both as a harpist, and as a storyteller and actor, Rosanna Moore, has made it her aim to combine theatre and music wherever possible. She has recently had success in multiple international competitions such as being first harpist to be a finalist at the Gold Medal Competition at RNCM (the highest accolade offered for solo performance), won the Stan Baker award for jazz improvisation, was a semifinalist in the Dutch Harp Competition and placed third at both the Welsh International Jazz and Pop Harp Competition and Tierra47’s International Pedal Harp Competition.

In addition to performing as a tenured member of the Rochester Philharmonic Orchestra, Rosanna can often be seen with ensembles such as Ensemble Signal, Slee Sinfonietta, Orchestra of the Southern Finger Lakes, Cayuga Chamber Orchestra, Symphor!a, Binghamton Philharmonic and Buffalo Philharmonic. She was invited to give the opening solo recital at the Sentmentat International Harp Festival, Spain in 2018. In 2020, she will appear for the fourth year as principal harp with the Lake George Music Festival, NY.

As an actress, she has worked as a narrator for orchestras and ensembles in addition to doing voice over work. In a combination of both art forms, she has worked with trombonist/actor John Kenny, was awarded honorable mention in the Eastman Lecture Recital Prize for her research and performance into the choreography used in R. Murray Schafer’s Crown of Ariadne and created a Vaudeville harp show entitled ‘Roll Up, Roll Up’, presenting theatrical Save harp works and storytelling, which won her a spot in the Dutch Harp Competition’s semi final in 2018 . Her research into the relationship between music and theatrical performance practices will be published in Contemporary Music Review in 2020 and will be presented at the World Harp Congress in Cardiff, 2022. Rosanna also provides workshops to musicians on stage presence and etiquette and the use of acting techniques from theatre practitioners to further musical expression. She has recently signed with the label Orpheus Classical to release her first album of all American harp music due for release in 2021.

As a passionate advocate for new music, Rosanna pesters composers until they write for her! This has lead to two world premieres of concerti, the US premiere of David Horne’s Splintered Instruments and Amy Victoria Nam’s Somewhere to Elsewhere, a show entitled God Complex with her percussion and harp duo Sticks&Strings , an upcoming recording project with her flute, viola, harp trio, Trio Alexander, and new theatrical commissions with her Hats+Heels bassoon and harp duo. One upcoming project will be a new concerto for the Electric Delta Harp written by Grammy Award Winner DJ Sparr. Since 2017, she has served as a harpist consultant for the Future Blend Project, an innovative and collaborative composition competition. She also served in a number of roles on the executive board of OSSIA New Music collective, including as President in the lead up to the organization’s 20th anniversary season.

In addition to performing, Rosanna is the new Instructor of Harp/ Artist in Residence at the University of Oregon where she will teach students at the collegiate level as well as developing a community harp division and also is the Harp Instructor at Opus Ithaca. Formerly she was the Professor of Harp at Nazareth College and the Harp Instructor at the Eastman Community Music School. In these roles, she works to bring the harp to as many students as possible and teaches students of all ages and abilities. She was recently elected as President of the Rochester Chapter of the American Harp Society. In addition to this, she is the co-founder and host of the Soundweavers Podcast with Dr. Adam Paul Cordle and Dr. Blaire Koerner. Soundweavers is a chamber music podcast that explores the trials and tribulations of being a chamber musician or composer in the gig economy.

Rosanna recently completed her Doctor of Musical Arts degree with the Performer’s Certificate, an Arts Leadership Certificate and a minor in theatre at the Eastman School of Music, supported by the Eileen Malone Scholarship. She previously studied at the Royal Northern College of Music and Chetham’s School of Music. Her wonderful mentors throughout the years have been Kathleen Bride and Eira Lynn Jones.